I found this meme on Facebook. I've noticed a rather symbiotic relationship between blogging and Facebook in the last little while. I've kept my "real" life fairly separate from my blogging world up until now, but the line between the two is getting further fragmented. The world is indeed getting a bit smaller.

Let's see how much I remember about my firstborn's arrival ...

1. WAS YOUR FIRST PREGNANCY PLANNED? Extremely planned, as outlined in my infertility saga (part 1).

2. WERE YOU MARRIED AT THE TIME? Yes.

3. WHAT WERE YOUR REACTIONS? Disbelief that it had finally happened. Fear, that it wouldn't last.

4. WAS ABORTION AN OPTION FOR YOU? Never.

6. HOW DID YOU FIND OUT? Telephone call a few days after visiting the clinic for bloodwork.

7. WHO DID YOU TELL FIRST? The hubby.

8. DID YOU WANT TO FIND OUT THE SEX? No, not really. But Ian had a burning need to know, and if he was to know there was no WAY I wasn't going to know too.

10. DID YOU HAVE MORNING SICKNESS? Not at all.

11. WHAT DID YOU CRAVE? Sweet. I was never much of a dessert person, but while pregnant, I just loaded up. Could be why I ballooned over 45 pounds.

12. WHO/WHAT IRRITATED YOU THE MOST? The fact that I could rarely get into a comfortable position to sleep. And then those darn excruciating leg cramps... ackkkkkk!!!

14. DID YOU WISH YOU HAD THE OPPOSITE SEX OF WHAT YOU WERE GETTING? Not at all. I was just ecstatic to be having a baby.

15. HOW MANY POUNDS DID YOU GAIN THROUGHOUT THE PREGNANCY? As per above, close to 50. I was huge.

16. DID YOU HAVE A BABY SHOWER? Almost one. I went into labour the day that the office was throwing me one. I had him one month early, so there was no way of knowing I would go into labour so soon! I called them on the way to the hospital...they collected the prezzies and delivered them home a few weeks later.

17. WAS IT A SURPRISE OR DID YOU KNOW? Total surprise.

18. DID YOU HAVE ANY COMPLICATIONS DURING YOUR PREGNANCY? No, it was smooth ... I was very lucky.

19. WHERE DID YOU GIVE BIRTH? Toronto.

22. WHO WATCHED YOU GIVE BIRTH? Ian. My mom didn`t even offer to come downtown. She`s a smart lady. As a labour and delivery nurse and trained midwife, I suspect that the last thing she wanted to see was her firstborn going through childbirth. I can totally relate to that. The nurses told me my mom would be appalled with how casual things are today (no gowns, no masks, heck, I even had Diana Krall playing in the background on our portable stereo!).

23. WAS IT NATURAL OR C-SECTION? Natural.

24. DID YOU TAKE MEDICINE TO EASE THE PAIN? Eventually yes. I wanted to try without the epidural, but visualizing the beach stopped being effective at about the 6 hour mark.

27. WHAT DID YOU NAME HIM? Well, it starts with L, that much I`ll give you. Although if you`ve been reading a while, you`ll already know.

Where does the time go? 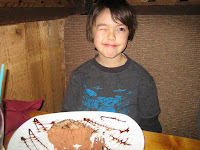 I haven't seen that meme before. I love it! I may actually have to use that one. ;)

I hear you about facebook blurring lines between known and unknown friends. It's a bit weird.

I got that on facebook, too. I am afrait to fill it out in case I can't remember stuff. I will look like a worse mom than I already do!

Your boy is beautiful! Congratulations! I wanted to return your blog visit. I'm glad you found me through Kami - I just love her to pieces! :) Anyway, you're always welcome at the Tea Room.

I saw this meme on J's blog. I'm going to have to do this one! MUST catch up on all your posts that I've missed.

Somehow being home with the baby gives me very little time for checking out everyone's blogs! :( LOL! I don't know why I thought I'd have all this "free" time! LOL! ;) xo

I really like this one too. And a happy almost 9 Birthday!

That was really neat!
(And I totally agree with the facebook blur!)

I started begging for drugs after awhile, too. Labor HURTS.