Along with other things recently, this blog has suffered somewhat. So I decided (and hopefully I won't regret) to do something about it. I joined Problogger's 31 days to build a better blog (31DBBB).

I've already missed some of the first assignments, including the following:
1/ SWOT analysis... on my blog? This is old school biz school. But I suppose I should take a stab at it, being a verified old skooler and all.
2/ Develop an "elevator pitch" for my blog. Marketing 101 again, I suppose. I think it will certainly come in handy at BlogHer '09, though. If people take pity and chat with me in the food line, I'll have something more interesting to throw at them. One would hope.

Both those items are now homework.

I'm rolling the next couple of assignments into one. Today we are putting together a list post and practicing promotion. I'm also going to give you some useful advice based on experience. Recent experience, trying to go back to my original *cough* hair colour.

Ten things that you NEED to know before you colour your own hair.

(I did this, not only as my salute to frugality in honour of our recessionary times, but also because the last salon colour I got lasted about 4 days before grays started peeking out, and I don't have another two hours and $70 to waste again any time soon.)

1/ Pre-prep work: Do the allergy test. Just don't put it in a conspicuous spot where people will wonder if that's a honkin' new mole or you're just happy to see them.

2/ Prep work: Read the instructions from beginning to end, BEFORE you start. That way you won't miss the part about framing your face with face cream so you can clean off the " scream" effect more easily later.

3/ What to wear: Borrow an old shirt from the man. Just don't forget that there's a reason he wanted to chuck it, as it is HUGE and that drips that you don't wipe away immediately will end up giving you "dirt-neck". Ewww... 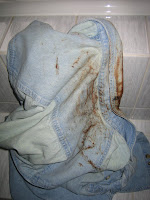 4/ Surround Sound: During the rinse cycle, don't have the TV on "Tyra" while they are discussing Facebook and Twitter addictions. Or at least turn the volume down so you don't know what you're missin' or what you should be dissin'. (Tyra? WTH?)

5/ The Area: Clear the decks. Give yourself ample room for splash and remove all possible targets within a 6 foot radius. And it's not a moshpit, so try to keep your head as still as possible when you're slathering. I forgot about my last foray into Jackson Pollock-ville.

6/ Pre-pre-prep work: Cut your hair to one inch length.

7/ How long? Regarding those "10 minutes to go" kits? Realize that 10 minutes only refers to the time that the colour should sit in the hair. But there's a dilemma. Do you time from the start, or when you've completed the whole head... because by the time you finish it could be closer to 20-30 minutes.

And then you're totally emo.

9/Survival tip B: If you wear specs like I do, put aluminum foil on the arms. You're not baking them, but they do actually save them from wrecking during the development time.

10/ Survival tip C: But don't wear your glasses while you're actually putting the colour in your tresses because it's difficult to work around the foil. And therein lies the problem, particularly if you're blind as a bat like I am. Just cross your fingers and be thankful that you can't see the back or the top of your head. 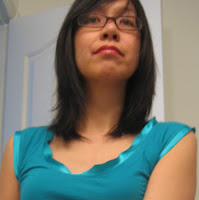 (The boy thinks it looks awkward, as in "good black, in a totally emo kind of way, Mom". A good thing?)

You are brave..i dyed my hair once.. dyed it green.. not on purpose either..haha

I think it looks GREAT!!!

I think it looks good! Your hair has really grown a lot too. I really need to do mine again too.

You are funny! Also? Brave.

Awesome hair, and I loved tip #6. I will add my experience from dying my own hair blonde back in the late 80s: If the box suggests using something called 'drabber' to tone down brassiness, do it. I didn't, and my hair came out a David Bowie orange. Which was fine because I was 22 and living 3 blocks from the Haight in San Francisco, but now that I'm 43 and living in the 'burbs, it would suck.

I dyed my hair once at home with my sister. It ended up half bleach blond and half orange, lol!

Why did I think this was going to be about AC/DC?

The 31 days things sounds cool--but do they have a cliff notes version? Like 31 Minutes to a Better Blog?

I think it looks great!

Great tips! I haven't dyed my hair at home for some 15 years but I'm pretty sure there is still some evidence on the walls from the last time I did it.

My salon color never seems to last, either. (It's Aveda and they use "natural" ingredients, so I wonder if that's it?) Maybe I need to go back to doing it old school, too!

Looks great. I wish I could get past the fear and could do my own highlights!

@Kim: thanks, I think crazy more than brave ;).

@Gina: thx, ow that I look at your pretty red/brown I'm rethinking again ;)

@Kami: more desperate I'm afraid, these grays are scaring me :)

@J: David Bowie Ziggy Stardust rocks LOL! I like your recent do, BTW.

@Ed: I know, I was thinking of linking up the song but it might have been a bit much combined with my pic, LOL!

@Midwest Mommy: there's always that fear at the back of my mind that I may have to invest in an arsenal of hats, just in case...

@Cherry: the wall thing was a bit of a shock to me, who knew how far these things could splat?

@Rima: Thanks! Aveda products are so nice, though...

@Mrs4444: Thanks, highlights on my own, that would be scary!