Oh I know, I'm being inconsistent with my title, but that's me living dangerously. You do realize that this is great therapy for me, right? Of course, we've got a few more questions, so there will be a Part 3. (I know, I cannot SHUT it!!!)

7/ From Cheryl: What inspires you?

Great question. For me it's not so much what, but who. My family inspires me. It's the legacy of my father. Starting with my mother who's done so much in her life. She recently suffered such a tremendous loss with my Dad's passing, yet she's keeping it all together. The hardest thing for me is to see her crack every so often as the grieving process continues.

Watching my siblings thrive in their careers and their family lives is really rewarding. You'd think that with almost 9 years of parenting under my belt, I wouldn't have anything to learn from them, but even though their girls are just 19 months old, they're both such amazing parents.

And in my own little family unit, my husband who I can't say enough about. He's an inspiration not only at home, but to his team at work. He's very encouraging and loves seeing his people grow and move onto bigger things. This carries through on the homefront too. He's so patient at home with me and especially with the kids. They absolutely adore their Dad, and it's easy to see why. I am a very, very lucky lady.

But finally, it's my kids who inspire me the most. Because they are my life and they make me continually strive to be a better mother, a better person. These little people are the ultimate reflection of me and what I can accomplish if I really vow to never give up. All those years of frustration trying to have our family were often unbearable, but for me it was never an option to stop. I get inspired every morning when they open up their eyes and say "Good morning Mommy" and wrap their arms around me. Cliche though it is, they do complete me.

8/ From Kami: My question for you is what did do career wise before making the decision to be at home with the kids?

I worked in the pharmaceutical industry in scientific affairs. Because I worked for a multinational company, I also had opportunities to travel a bit. Just enough to be exciting but not to be exhausting. Although I didn't realize it at the time that I started this career, it does lend itself well to working from home. So now I can consult. I've been able to pick up a project here and there, so there is the opportunity to increase my workload if I want to.

And do you see yourself returning to a job out of the home anytime?

I ask myself this question a lot more lately, since both kids are now in school. I don't know if I could return to the same role as I had before. I know that once I get on that wheel, my very ambitious and competitive hat goes on. Budgets, strategic planning, operational improvements, those were the types of things on my plate that I had an affinity for. In fact, that was the part of my job that I enjoyed the most and I suspect that I would want to keep climbing up that ladder again. Which would require more people management, more travel, and hence time away from home.

(Okay, so now that I'm done over-validating myself...)

Although the temptation is there whenever I get a headhunter call or my son is the middle of arguing with me about his assignments and the girlie decides that she needs to find the diaper for her doll at that same precise second ... it's not in the cards for me just yet. It should be interesting in the next few years. I find that as the kids get older, they continue to need me on a totally different level, what with activities, more involved homework etc. now becoming a reality.

9/ From Kami again: And when did you start bodyjamming and why? And also tell me again why you love it so. I am so not coordinated so I gotta know :).

I started bodyjamming around three years ago, as soon as they rolled it out at my gym. [And if this was an attempt to get me to vlog another routine, nice try :)]. I was getting bored of step aerobics and I've always loved to dance. I love the hip hop choreography, and routines are infused with disco, jazz, latin, crump... I find it works my brain just as much as it does my body. It's such a great workout and it feels like you're out at a nightclub with all your friends. The other bonus is that the music is very 'now' so it keeps me current. My boy thinks I'm pretty cool now that I can show him some moves to music that he knows.

I've made a few friends at the gym during these classes as the instructors make you feel like you're at their party. There's no other way to explain it. The beauty of it is that you don't have to be a great dancer - it does take about three classes to get to know the routines, but it's fairly repetitious and they keep the same choreography for at least 6 weeks. Everyone feels included and has a great time.

I think you would absolutely LOVE it.

I'm only sad that I wrecked my knee (and that woman ran her cart into same said knee...grrr!!!) and will undoubtedly miss the marathon fundraiser this year. I was actually contemplating training to be an instructor; I guess I'll have to pend that for now.

But our local Park & Rec now has the following classes : 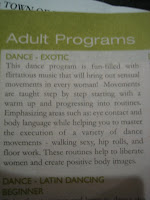 Can you believe that? Maybe I should check it out so I can qualify to live here.

10/ From one of my first blog pals, (who I now know in real life as well ) fab new momma extraordinaire C from Manitoulin: Probably the same question as Domestic Goddess (In Training)'s question. Got a favourite post? If so, which one and why?

Under the category of "funny" there was the Pink UFO. I like this one because it illustrates exactly why I need to have this blog.

Under the category of "not so funny and bullying", there was this. There's still a tiny part of that little girl in me.

Under the category of "life isn't always rainbows and cupcakes", any of my infertility posts, but this is the one that began it all. I like it because it started my story, and provides the conclusion without giving everything away. This story will also continue shortly, because this month is the 5th anniversary of the cycle that became a wondrous success.

And more recently in its own category, "Lucky". I still cry when I think about this one.

11/ From Cherry: When you go to BlogHer this year, is there anyone you might be star struck by? If so, then who?

BlogHer, I am so pumped about it. And also extremely nervous. (Why oh why aren't you coming with me?). But so excited to meet some of my blog friends in person, all of whom are "stars" in their own right.

That's the beauty of blogging though, that there are bloggers out there with huge fan bases, those who have been interviewed in print and on TV, and still make time to comment on little blogs like mine from time to time.

There are so many bloggers I'm looking forward to meeting and just seeing, maybe touching their hands, squee?? I think I'll have to bring a chin-bra just to keep it off the floor as I make my way around the conference...

12/ From Huckdoll, a FOUR parter (and only because I love you girl ;):

You're stuck on a desert island.

1) With who? (one person, can't be your hubby cause he'll be taking care of the kiddos).

I'll have to admit my recent celebrity crush is biased because I've recently seen this fellow in a few good movies , including period pieces (I love period pieces). 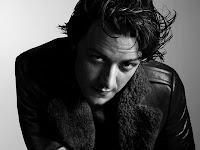 James McAvoy, skinny, little pale Scot with the puppy dog eyes. Oh, I know he's a young'un (you already know that I'm a cougar), but did you also know that I'm only a couple years older than his WIFE? So, yeah, I'd probably have a chance with him.

On second thought, let's just stick to someone my own age (well, hubby's age), with yummy Clive. See? He does period pieces too...

Just ONE? But I NEED to shuffle!

The first one that came to my mind was "So" by Peter Gabriel because I love "In Your Eyes" and the duet with Kate Bush ("Don't Give Up")... but this album was released the year that I met the husband and we listen to it a lot. Not too kosher if I'm on the island with Clive.

I can't decide. Let's see what's in my CD player on shuffle... 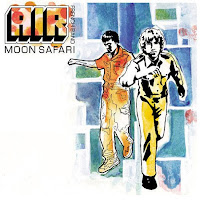 Best make-out album of the 1990's according to pitchfork.com. Figures.

(Do you think hubby will want me back if this is what happens while he's at home with the kids :)?)

3) Which one beauty product?

Lipstick, preferably MAC just because they used to be cool.

The Gargoyle, because I am this close to finishing it, and there are actually several love stories in one.

Whew, I don't know about you, but I'm wiped.

Labels: links, Me, this won't be the 500 things about me post

Okay, now I want to try BodyJam. After this half marathon is over (it's sucking all my energy up right now) I'll have to look for a class.

I wish they offered BodyJam around these parts. Do you know if there is a good DVD?

I love to dance too! I have a workout for you then...Kami can attest it is one tough dance video, by Madonna's trainer.
If you want I will mail you a copy, drop me an email!

I love your answers......inspiration is everywhere in your life, that is wonderful to hear.